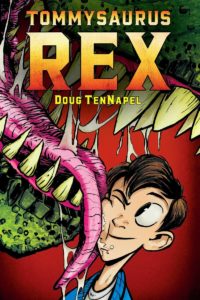 When Ely’s beloved dog, Tommy, is hit by a car, he goes to his grandpa’s house for the summer to get his mind off things. While exploring a nearby cave one day he discovers a full-grown but friendly Tyrannosaurus Rex. As the news of the dinosaur grows around town, so does the friendship between Ely and his Jurassic pet. But Randy, the mean kid down the street, decides he’s going to make life miserable for Ely and his dinosaur — to devastating effect.